Hnevank Monastery is located in Lori province, on the right bank of the Dzoraget River. The exact date of construction of the church is not known. It is believed that the monastery was constructed in the 12th century. However, judging by the architecture of the church, it was built in the 7th century. Today’s half-ruined complex once included three churches, a narthex, residential, economic and other buildings. Recently, the church was renovated. About 50 m from the complex to the east are the remains of a large two-story building with a large number of doors and windows. Most likely, this building served as the residential part of the monastery. 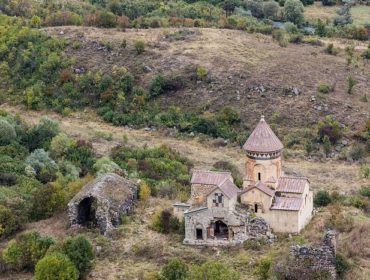 How to get Hnevank Monastery from Yerevan

The well-established transport infrastructure of Armenia allows to get to Hnevank Monastery by a private car or with the help of various travel companies which offer regular excursions and tours to different sights of the country. Due to the geographical location of Hnevank Monastery the trip will not seem long.

The high season in Armenia lasts for a long time due to the pleasant climate conditions. Warm days in Armenia start in March and last until late autumn; winter is usually snowless and not long. The high precipitation season is variable. The tourist season for Hnevank Monastery depends on the weather conditions.

Hnevank Monastery on the map of Armenia

THE BEST TOURS AND EXCURSIONS TO HNEVANK MONASTERY