Karmravor Karmravor (meaning “reddish” because of the color of the dome of the church), also known as the Church of Holy Mother of God is a 7th-century Armenian Apostolic church in the town of Ashtarak in the Aragatsotn province. There is an old sad legend associated with Karmravor church. According to it, once there were three sisters living here. All three girls, unfortunatelly, fell in love with one young man, whose name was Sargis. Unable to resist their feelings, the elder sisters decided to commit suicide by sacrificing their lives for the happiness of their younger sister. So two girls, one in a red dress and the other in an apricot dress, threw themselves from a cliff directly into the bottomless gorge of the Kasakh River. Hearing this tragic news, the younger sister in desperation ran out of the house in her snow-white dress and jumped from the rocks after her beloved sisters. The young man Sargis could not bear the burden of guilt and became a hermit monk. And in memory of the three sisters at the very cliff, people built three small churches – Karmravor (“Red”), Tsiranavor (“Apricot”) and Spitakavor (“White”). 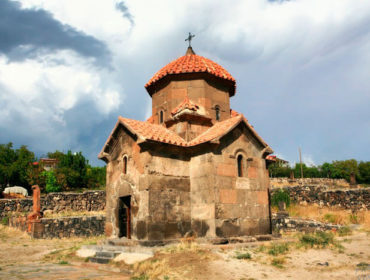 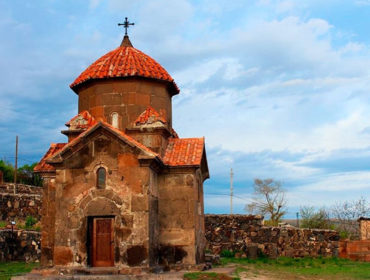 How to get Karmravor Church from Yerevan?

The well-established transport infrastructure of Armenia allows to get to Karmravor Church by a private car or with the help of various travel companies which offer regular excursions and tours to different sights of the country. Due to the geographical location of Karmravor Church the trip will not seem long.

The high season in Armenia lasts for a long time due to the pleasant climate conditions. Warm days in Armenia start in March and last until late autumn; winter is usually snowless and not long. The high precipitation season is variable. The tourist season for Karmravor Church depends on the weather conditions.

Karmravor Church on the map of Armenia

Sights nearby of Karmravor Church

The best tours to Karmravor Church